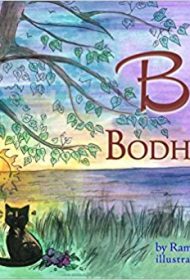 A cat named Bindi introduces concepts of Buddhism to youngsters in the picture book Bindi and the Bodhi Tree.

Bindi has lived at an ashram in Hawai’i since being adopted by the book’s author, Ramakrishna. Here, Bindi narrates a tour through the ashram, and in casual tones touches on many of the central tenets of Buddhism. Among other concepts, she mentions mantras, the Bodhi Tree where the Buddha found enlightenment, and the fact that her master judged her by her appearance seven years ago, when “he was much more shallow […] than he is now.” Michaels delivers humor as well, introducing Malasada, the ashram’s dog, with the words, “Since she’s a dog, I try to have compassion for her.”

This all leads to an enjoyable exploration of yoga, led by Bindi, in which readers are urged to attempt the eight poses demonstrated via Mae Porter’s exquisitely colored artwork. The book ends with a simple meditation exercise and the word “aloha.”

Reading Bindi and the Bodhi Tree is an immensely satisfying experience, as it equally engages mental, physical, and spiritual aspects. However, as an introduction to the basics of Buddhism for children, it has one glaring omission: There’s no glossary for the many potentially unfamiliar terms used. While some of these words are explained organically as part of the text, others, like “mantra,” “Buddha,” and even the word “bindi” (a decorative mark worn on the forehead by Indian women, which gives the main character her name) rely heavily on context clues; a quick reference for definitions would have been welcome.

Despite this shortcoming, Bindi and the Bodhi Tree is a beautiful book whose animal guide offers a gentle, unintimidating entrée to some of the practices of Buddhism, without ever mentioning the religion by name. As such, devotees of Buddhism, young and old, will enjoy the book, and even readers with no previous knowledge of the subject will find themselves “enlightened.”