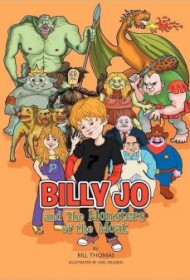 Bill Thomas was ten years old when he suffered a traumatic head injury causing severe brain damage. His teachers and friends began teasing him as learning and memory difficulties overwhelmed him. Billy Jo and the Monsters of the Moat is based on Thomas’ real life experience.

The main character, also named Billy, is friendly until he is hit in the head and suffers head trauma. Townspeople and friends alike make fun of him. Those he trusted the most turn on him and break his spirit. Over time, he becomes increasingly mean spirited, thriving on anger. “He collected anger,” Thomas writes. “….He would stuff this anger deep inside of him and then he would go to his own little world and do something special with it.” Eventually, he does just that: he draws monsters and uses his anger to bring them to life so that they can protect him and take revenge on the cruel townspeople.

It’s understandable that one would build up fierce anger and fear from such terrible treatment at the hands of others. Readers will find Billy’s situation heart-rending, particularly in light of its genesis. The difficulty comes in trying to translate those experiences into a children’s book. Such intense focus on these negative emotions (the word “anger,” or a derivative of it, appears 18 times on one page alone) is bound to trouble most readers in the intended age group, who will find little reprieve from the darkness.

It would have been better had Thomas lightened the tone and made the book more approachable. As it stands, most adults will have misgivings about reading this book to children, nor would a parent want their child reading it without discussion.

Fortunately for both Billys, the story ends on a positive note. But readers spend much too long on the dark side before encountering this glint of happiness.