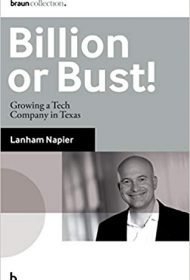 Napier chronicles his journey from director of a venture capital firm to his ascension to Rackspace’s CEO and eventual departure in 2014. Throughout, he relates the sometimes-harsh realities of bringing a company to the billion-dollar mark. About Rackspace’s first IPO, he writes: “By the end of the third quarter of 2000, Rackspace was broke, and my incentive stock options, like the stock options of most people during internet mania, were worth nothing. I withdrew our IPO filing and knew that…Rackspace.com would soon be bankrupt.”

Rackspace survived through layoffs and an initiative he called “Project Profit.”  This was a strategy—inspired by Napier’s role model, Curly from the move City Slickers—to focus every employee on a single objective: increasing profitability. The initiative succeeded, but after hard negotiations to sell the company, the deal fell through when the fallout of 9-11 effectively froze business dealings.

Finally, in 2008, the company successfully made an IPO. Unfortunately, Napier’s partnership with Rackspace’s co-founders frayed over how to maintain competitiveness, leading to his departure.

Napier interweaves his personal story growing up as a proud 5th generation Texan. This includes insight into his decision-making strategies: focus on one main goal instead of many simultaneously; consider the long game while playing the short game, etc.  He offers anecdotes about those who influenced him, family life, and his and his wife’s financial struggles.

Ultimately, it’s the author’s humility and reflectiveness that turn Billion or Bust! into a truly worthwhile read. Napier’s tone is candid, reflective, approachable. Readers glimpse the sometimes-great, sometimes-flawed man behind the accomplishments. The book offers both playbook-style business advice and heartfelt insight into how to balance leadership with personal responsibilities.

In all, Napier exceeds the standard “tycoon of industry” memoir with this personal, honest, and inspiring story about what it takes to achieve greatness.