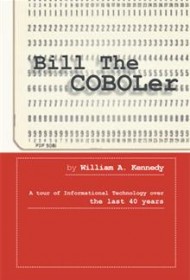 William A. Kennedy began a career in Information Technology, or IT, in the early 1970s after returning from serving as a Marine in Vietnam. One of the main computer programming languages used at the time was Common Business Oriented Language, or COBOL–hence, the book’s title. Kennedy’s career spanned a period of incredible computing technological leaps, from walls of machinery that needed punch cards to tell them what to do, to desktop PCs and now, to handheld smartphones. Marveling at the march of progress, Kennedy wrote this book as a witness to the changes in society brought about by technology.

The elements for an intriguing book are here: Kennedy is mostly a folksy, conversational writer, like a favorite uncle reminiscing about the good old days. He has a wealth of the knowledge, having kept up with every stage of the high-tech revolution that came his way. He has fun anecdotes about bad bosses and pretty teachers, or Dilbert-like co-workers.

But the story bogs down in the unglamorous reality of programming and crunching numbers for railroads and healthcare companies. At times he veers off into too much technical jargon. While it’s the nature of the tech industry, unfortunately, the narrative becomes hard to follow when the reader tries to keep straight JCLs from OC7s and TSOs and ISPFs from CICS and IMS. It’s doesn’t get any easier when the full words are more confusing than the acronyms. At other times, Kennedy tends to pontificate about the importance of education or the ethical challenges of cloud computing, as if lecturing, but making rather obvious points.

The toughest challenge, however, is the book’s writing mechanics. The grammar is sometimes tortured, and letters and words are inexplicably left out (“a” and “an” are often M.I.A.). Many of the problems could have been caught by even a cursory reading.

Although this book had much potential, sadly, it doesn’t deliver on its promise.