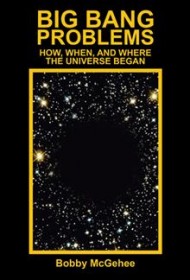 In this slim volume, an engineering physicist gives a rundown of the “problems” he sees in the very foundation of cosmology, the Big Bang theory, and suggests an alternate explanation for the origin of the universe.

While many readers accept the generally prevailing wisdom — that the universe was born with a “big bang” about 13.7 billion years ago, starting from a point of singularity — author Bobby McGehee believes otherwise. In Part I of his book, he outlines a series of ten problems with this theory, including “ignoring speed of light as a limit for expansion” (#2), noting his conclusion that the established theory violates some laws of physics.

Part II is devoted to McGehee’s alternate theory, which essentially suggests that the universe was a collection of primordial matter, or positroniums, and its delicate equilibrium was disturbed by a “deflagration wave” precipitating the creation of a series of other universe-defining objects.

This is highly technical material, often presented in a cursory manner that presumes background knowledge and reaches important conclusions within just a few paragraphs of discussion. More often than not, the facts leading to these conclusions are not footnoted, lessening the book’s scholarship and authority. (The author does provide a somewhat anemic bibliography, which includes two of McGehee’s own titles, making for a rather closed loop of logic).

In addition, the author’s prose can be confusing in spots. (On page 14, for example, he notes: “It has been proven many times.” But it’s unclear what exact idea the “It” refers to, nor is the sweeping statement supported with citations.)

Due to the above, the author’s ideas are difficult to access. He himself admits that it might take “several lifetimes for this proved universe origin realism to prevail,” and his fairly pugnacious attack on NASA and other scientists might further complicate the process.

Nevertheless, challenges to the established order shouldn’t be summarily dismissed, and for those willing to navigate this difficult text, his book provides discussion points for further exploration into one of humanity’s most existential questions: Where do we come from?