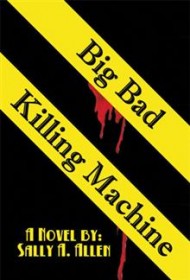 Colton Colby is a star high school football player with a dark secret: He enjoys hurting and killing those who’ve wronged him. As Colton navigates his way through school, dealing with an overprotective mother, his first love, and other challenges, he must resist the temptation to hurt others again, no matter how good it might make him feel.

Sally A. Allen’s twisted but engrossing novel Big Bad Killing Machine deals with a complicated main character. Colton appears to be some sort of sociopath, taking revenge in the most violent of ways on those who he believes have crossed him. Although he never regrets his actions, he does realize that his urges aren’t normal and wants to live life on the straight and narrow. His dueling impulses make up much of the main narrative, and though Colton isn’t a likeable character, readers will want to press on, eager to discover which side of his opposing natures wins.

The premise of Big Bad Killing Machine is rather hard to believe, as it’s difficult to imagine that someone would get away with that many murders without even a hint of suspicion. However, if readers can suspend disbelief, they will likely enjoy the manner in which the author deals with some serious issues through her narrative: namely, the way athletes are viewed and treated differently in high school, and indeed, in society. The fact that Colton gets off scott free every time because he’s a football star presents a thought-provoking theme for readers.

Indeed, this subject, along with Colton’s controversial actions, makes Big Bad Killing Machine a provocative choice for readers looking for a discussion-oriented novel. And for those simply looking for a quick, entertaining diversion, Allen’s confident, easy writing style is hard to resist, ensuring that most readers will forgive the book its flaws and enjoy the ride.