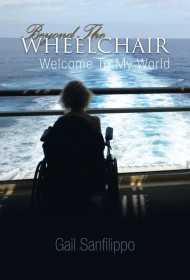 In this memoir, Gail Sanfilippo chronicles the challenges and victories of living with severe cerebral palsy. Sanfilippo’s noteworthy goal appears to be to teach readers not to judge by appearance alone, though she only somewhat succeeds.

On the surface, her story is engaging. As a child, Sanfilippo couldn’t sit up without support, didn’t speak, and lacked the fine motor skills to hold a bottle or spoon. At age five, she started kindergarten at a local school but was later shuttled to a host of special schools for children with cerebral palsy, including a nightmarish 14 months away from home at a rehabilitation center where she was subjected to physical punishment by a frustrated aide and daily enemas when she didn’t have a bowel movement upon waking.

Following back surgery to correct severe scoliosis, Sanfilippo completed high school and then attended the University of Massachusetts part-time. “In a sense, I was in the real world for the first time,” she writes. It took seven years but Sanfilippo graduated with a sociology degree. She moved into her first apartment when she was 33. Following a series of bad relationships with both able-bodied and disabled men, she met Ed, the “love” of her life. Today they share a home and travel worldwide.

While Sanfilippo’s story is poignant, the memoir is marred by grammatical and formatting errors, stilted prose, a disjointed chronology, and vitriol toward some of her teachers and relatives. She only touches on how her disability affected her siblings. While she hints at the looks of disdain and horror she experiences, Sanfilippo never fully expresses the pain such ignorance causes. As a result, it’s a climb to get beyond the book’s many flaws to appreciate Sanfilippo’s considerable courage and determination.