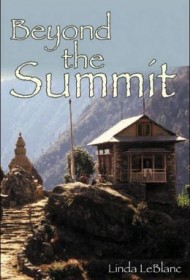 This intelligently written adventure/romance novel details the lives of Sherpas in the Himalayas who earn a living as high-altitude porters for tourists who want to view Mt. Everest. Beth, an American journalist, has just arrived in Nepal to capture the “never-before-told” inside story of the Sherpas. She has brought along a top photographer, Eric, who is also her longtime boyfriend. Upon meeting Dorje, a handsome and virile young Sherpa who is one of the few who speaks English, Beth unexpectedly falls deeply in love with him, and he for her. However, harrowing mountain climbing expeditions and intricate family dramas complicate their hidden romance.

This detailed look at the culture, beliefs, and traditions of the Sherpas and their difficult lifestyle is especially rich because it comes from one who knows it well. Adventure-traveler LeBlanc, who began working with Sherpas in the 1980s, was founder of the first hut-to-hut system in Nepal, helped establish 18 lodges in the Solo-Khumbu region and organized and led treks to the Everest Base Camp. A dramatic travelogue, this book successfully transports the reader into the rare air of a chilling, dangerous, terrifying and sometimes deadly way of life.