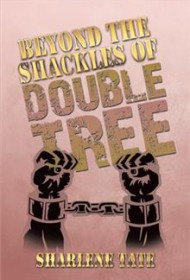 In her debut novel, Beyond the Shackles of Double Tree, Sharlene Tate crafts a tremendous tale of 18th century slavery in America that transcends time and paints a story full of energy and emotion.

Adeptly told from multiple points of view, the novel moves among African-American slaves, white plantation owners and those who fall somewhere in between. The main plot circles around two groups of slaves from different plantations running for freedom and their owners who relentlessly search to retrieve them. Alternating waves of safety and danger befall the characters, with the subsequent emotional twists and turns this prompts, all culminating when the plot elements come crashing perfectly and tumultuously together.

From details of the hardships endured daily by slaves to the dangers of secret slave hunters in New York and slaves slyly passing as whites, each page unfolds a piece of the story that seems truthful in spirit if not in actuality. Lending to its credibility is the adept use of slave dialect, such as “Hi we gwona do dat?” In less capable hands, this would slow a story and possibly make for some cringeworthy moments, but Tate’s skillful use of this trait, along with her prodigal ability to develop characters, helps to bring the story to life.

The only real flaw in this novel is its spacing issues; the story abruptly changes points of view without any distinction other than a new paragraph. Extra spacing or sub-headings to indicate the change in perspective would easily clear up the confusion, which though momentary, detracts from the otherwise steady flow of the story. Also, the narrative suffers from some issues with spelling and commas that, though not prolific, are enough to warrant a thorough proofread.

Double Tree is a beautifully constructed narrative. Tate impeccably weaves together the stories of multiple characters in a tale so captivating, it’s hard to believe it is her first novel.