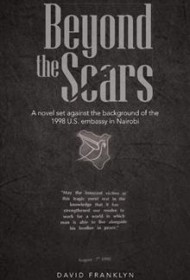 The sensitive author of this novel set amid the 1998 bombing of the U.S. Embassy in Nairobi, Kenya, does not use the tools of fiction well. But David Franklyn has such a depth of feeling for humanity and such insight into eastern Africa’s troubled political and religious history that the book earns admiration despite its tangle of technical and dramatic flaws.

A native of Grenada, Franklyn is a United Nations legal officer long stationed in Kenya, and the Nairobi terror, which took more than 200 lives, struck him deeply: He lost friends in the fiery attack. Trying to make sense of such madness, he focuses on the enduring relationship of a fictional photographer/graphic artist named Juma Bantu and his beloved wife, Poetry; on their doomed, playwright niece, Nadia; and on a group of other relatives and friends who get embroiled in the violence.

One major flaw is that the blast does not occur until page 137 of this brief book, which renders it almost anticlimactic. Franklyn’s many narrators – who include Juma, Poetry, a young woman named Kizzi and a U.N. worker named Curtis Johnson – are so difficult to sort out from chapter to chapter that they confuse his tale of shock, grief and emotional healing.

In its lucid moments, though, Beyond the Scars can be powerful. Juma’s visit to a museum commemorating the victims is a moving testimony to loss, and Poetry’s trauma is painfully vivid. “A blacksmith hammered on an anvil in my head,” she tells us.

Juma works lovingly and hard to ease his wife’s nightmare, but there’s no happy ending. In the novel’s last four pages, Franklyn further darkens the proceedings with the eruption of an even more monstrous atrocity: the 9/11 attacks in far-off New York.