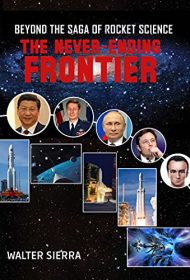 Walter Sierra closes his four-volume series and resumes his in-depth analysis of rocketry with Beyond the Saga of Rocket Science: The Never-Ending Frontier. In this book, he concludes his historical study while also giving editorial perspective and projections.

Sierra begins where he left off in volume three, covering the former Soviet Union and its space program. The author describes the impact of that country’s breakup, and, in particular, how Vladimir Putin maneuvered to maintain his hold on power until at least 2036. Sierra paints an optimistic picture of Putin guiding Russia to a world power once again, despite the endemic corruption permeating the country.

Indeed, while Sierra notes the downsides of Putin’s rule, he generally emphasizes the positives, and the author’s theories on the impact of that country’s breakup seem to miss the mark. For example, Sierra, speculates that Putin wouldn’t be the type to attempt a land grab should the collective break into its original nations. Current events, sadly, prove otherwise.

Sierra goes on to describe Russia’s military capabilities and space program in detail. He thoroughly describes Russian rocket and space agencies of today, and summarizes Russia’s space plan out to 2040.

The author also analyzes global rocketry’s current state and the progress of space development in diverse countries, including China, India, the United Kingdom, and Brazil. Additionally, he examines the lives of prominent pioneers in commercial space exploration such as Richard Branson and Elon Musk (he devotes as much real estate to Musk’s private life as his professional accomplishments).

Sierra then turns to the speculative, examining work done in Search for Extraterrestrial Intelligence (SETI) studies and our quest to know “if there is life out there.” This transitions into theories about evolution, death, and the origins of life. The author also posts his opinions on even more deeply existential questions, such as whether there is a God and if so, why would He allow suffering and evil.

The book could easily stand on its own, except that Sierra often refers to details from the other volumes without exposition. For example, he mentions his discussion of MRBM in another volume, but neglects to expand on that acronym. Additionally, Sierra frequently offers tangential asides, such as his cartoon depicting his opinion in comparing modern versus Neanderthal development of systems requirements.

Packed with information presented at a rapid pace, the narrative can sometimes feel overwhelming. The latter is somewhat mitigated since, as in previous volumes, there are copious illustrations, charts, and tables to break up the text. In addition, Sierra conveniently provides appendices covering topics ranging from a mathematical primer on rockets to the estimated longevity of humankind.

Overall, this tome neatly completes Sierra’s series, and is a serviceable reference for space enthusiasts, although novices could find it challenging, especially if they are unfamiliar with the series’ first three books.