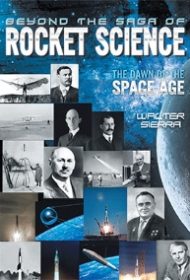 While one might think the space age began with astronauts circling earth, actual rocket scientists such as Walter Sierra know that the genesis of rocketry dates back several millennia. In this glossy, coffee-table style volume—the first of a series—Sierra presents that often-fascinating history.

Sierra opens with a discussion of the series, then introduces readers to this volume in which he follows rocketry development from ancient China to the mid-20th century. What follows is satisfyingly full of facts and figures and all the expected big names (Wright Brothers, Robert Goddard, Theodore von Karman). Sierra has done his research, and while he tends to take quantum leaps in his chronology— e.g., the rocketry novice might appreciate a clearer path from the introduction of Chinese “fire-arrows” in 1045 A.D. to the art of flying at the turn of the 20th century—his information throughout is solid.

Readers will discover many interesting tidbits, including that the Soviet space program moved quicker than the U.S.’s because it wasn’t bound by the need to make things perfect, only complete. And the trip for famous space-dog Laika was always intended as one-way; had she managed to survive the stress of the journey, she would have been euthanized with poisoned food upon landing.

The book is nicely produced, with scores of photos and informational graphics. But while Sierra obviously has a command of the topic, he employs an unusual delivery method, occasionally using fictional devices. This begins in his description of 3rd century China, where he places modern language into the mouths of warriors, and continues into the 20th century, where historical figures are attributed with quotes that include dialect (using “Vell” for “Well” and “Ve” for “We,” etc.). This method can be offputting.

Because Sierra’s narrative doesn’t follow a clear building-block path, this may not be the optimum introductory volume about rocketry. But those with prior knowledge of the topic will certainly find much here to appreciate.