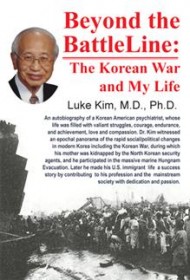 Dr. Luke Kim’s book, Beyond the Battle Line, started as a short memoir for his family. The physician and psychiatrist notes that he expanded that original idea into a larger book aimed at a wider audience because he wanted to share his experiences with younger Korean- and Asian-Americans, many born long after the Korean War ended.

Born in 1930 in what is now North Korea, Kim was a witness to, and unwilling participant in, history, seeing: the Japanese occupation of Korea before World War II; the nation’s brief postwar democracy; anti-government student riots; the arrival of a Chinese-backed Communist government headed by Kim IL Sung, and the Korean War. He found himself taken from high school and sent to work in a munitions factory; he had to show his allegiance to Japan by changing his name from Korean to Japanese; he and his family fled the North and escaped to the South, only to have the North invade, sparking the war. Most traumatic, his mother, a Christian community activist, was taken away by North Korean government forces and never heard from again.

Readers will find his accounts of Korean life informative, especially considering North Korea’s increasing presence on the world stage. Kim’s first-person experiences convey a picture with which most Americans, no matter their background, are unfamiliar.

But beyond that, the book is the story of one man’s determination to succeed. He came to the U.S. virtually broke, became a citizen, received his Ph.D. in clinical psychology and was a clinical faculty member at the University of California Davis School of Medicine for 35 years.

The writing in Beyond the Battle Line is sometimes choppy, and portions (his list of achievements and samples of his father’s writings, for example) seem aimed more at his family than general readers. Minor copyediting errors are a small distraction. But the book succeeds in providing solid background for anyone curious about the tumultuous history of North or South Korea.