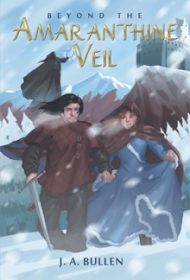 J. A. Bullen’s fantasy novel revolves largely around a heroic knight and fabled “slayer of monster, mages, and men” who finds himself at the middle of a grand-scale political conspiracy.

Tristan Stryfe lives in the kingdom of Altair. When Stryfe’s fiancée, Kirin Talmarian, a beautiful noblewoman from a rival kingdom, is abducted by rogue magic users, he must rescue her before she is harmed or risk that the already tenuous relationship between nations deteriorates into all-out war.

The former Templar and his crew eventually find and rescue Kirin, and for a time, the future looks idyllic. But something increasingly begins to bother Stryfe: Why was Kirin abducted in the first place? Why does she now show signs of carrying the Amaranthine Blessing (i.e.: being able to use magic)? And what exactly are the rogue sorcerers ultimately attempting to do?

There’s much to like here. Bullen does a solid job of creating an intricate storyline with unplumbed possibilities, and his cast of characters, albeit stereotypical, is mostly well described and authentic.

Unfortunately, there are significant failings as well; foremost is the character of Tristan, who is so two-dimensionally morally upright that he almost becomes cardboard. His lack of depth negatively impacts the entire storyline. Another problem is the noticeable drop in tension in the novel’s latter chapters. While the story’s first half is breakneck-paced and action-packed, there’s a dramatic drop in intensity about halfway through. Although the last few chapters recapture that tension, the prior lack of action and intensity is conspicuous.

Lastly, the manga-like cover art doesn’t accurately convey the book’s contents, as the narrative is in no way a cartoonish or preadolescent fantasy.

The two-dimensional nature of Tristan’s characterization is a substantial obstacle to reader enjoyment, as is the uneven pacing. Still, Bullen has created a sturdy foundation for what could be, with some revision, a highly entertaining fantasy adventure.