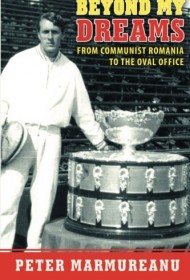 Peter Marmureanu shares his surprising and unlikely rise from an impoverished early life in Communist-held Romania to freedom and a berth with the tennis elite in this engaging, well-written autobiography.

Born in 1941, Peter had a “grim, gray, cold and threatening early home life” with never enough food, clothing, fuel or warmth in a country crushed under the harrowing rule of Nicolae Ceauşescu. At age 10, Marmureanu took a job as a ball boy on the clay courts of a Bucharest sports complex, earning just 20 cents a day to help his family.

The barefoot boy was pounding balls against a wall with a stringless wooden paddle when an omniscient elderly club member, recognizing potential, gave him a quality racquet, money for tennis shoes and encouragement. By age 18, Marmureanu became the country’s number two player, competing on center court at a Davis Cup match.

Soon after, Marmureanu was playing at major venues worldwide against top competitors (and later coached Chris Evert Lloyd and Martina Navratilova for the Women’s Tennis Association). Before plotting his harrowing defection to America, he was forced to be a courier of top-secret documents for Romania’s counterintelligence. He also slyly smuggled in contraband (including condoms, penicillin and clothing) for the needy.

This is a story well told — deeply interesting and informative, and blended with crisply drawn images of people and settings. Intertwined are the author’s palpable fears and haunting nightmares. He adds an occasional light touch, as in describing the sometimes-outrageous antics of teammate Ilie “Nasty” Nastase and the pranks of young John McEnroe. President Gerald Ford and Donald Rumsfeld also come into play in helping to secure his citizenship.

This enlightening autobiography will be a delightful and riveting read for tennis aficionados and those interested in an insider’s view of then-Communist Romania.