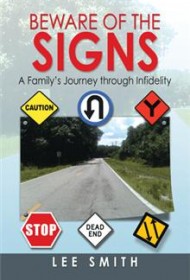 In Beware of the Signs, author Lee Smith (not her real name) chronicles the fallout from her husband’s serial infidelity.

While the author’s hurt comes through clearly here, the book suffers from a directionless, often-confusing narrative. In long chapters full of asides and digressions, Smith describes how she walks in on “Al” while he’s on a compromising phone call and discovers he’s been sleeping around.  Attempts at counseling don’t reduce her anger, and the couple’s two daughters feel the stress within the household: One begins a pattern of self-harm and ends up being placed in foster care.

Unfortunately, rather than documenting signs that point to infidelity, as the title suggests the book will attempt, Smith’s goal seems primarily to complain about Al and criticize the women he slept with. Occasionally, a promising moment arises:  When she learns her husband has been frequenting sex clubs, for example, she insists on going with him, expecting to find wanton depravity on display; instead, she discovers a pleasant environment that supports her sexual self-esteem. It’s an exceptional moment, but instead of connecting the dots about sexual freedom and openness and their relation to infidelity, Smith writes at length about her refusal to discuss how the evening ended to spare her daughters the shame — and things bog down again.

A passage detailing an attempt to murder Al illustrates how scattered Smith’s thoughts appear on the page: “I have to say I don’t remember where my idea originally came from, so I am going to put the blame onto one of those addictive daytime shows, but I must confess the plan I came up with was never one used on television.”  (She gave him a bowl of candy in hopes he’d go into a diabetic coma.)

Beware of the Signs is a sad story, but its lack of cohesion makes it a challenging read. And its misleading title is bound to lure readers who will feel disappointed in the end.