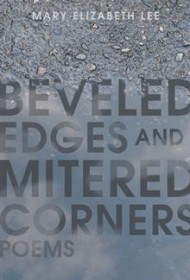 Mary Elizabeth Lee’s poetry collection, Beveled Edges and Mitered Corners, demonstrates a keen attention to language and image that portends a promising future for the poet. The collection is comprised of both nature and narrative poems thematically linked through an ongoing meditation on mortality.

Her syntax is often lyrical, as in “How like ballerinas/ these three myrtles were” and “My grief is young still and demanding.” And her many moments of intensely musical language are epitomized by the strong assonance and alliteration in these lines: “that reads the tea leaves/ and believes in water witching.” The poet also delivers many fresh examples of literary comparison: “I have collapsed into myself/ like a downed parachute”;  “The words have dried up, brittle as pine straw.”

One of the most successful poems in the collection is “An Open Letter to Adrienne Rich,” which brings Lee’s speaker into conversation with Rich’s canon and results in a stirring revision of the Christian creation myth: “This time, I would not tell Adam. I/ would cavort with this god, this/ serpent man, behind Adam’s back.”

Unfortunately, such highlights are also accompanied by weaker poems that should have been weeded out. Some rely on more clichéd examples, less incisive language, and subject matter that is less urgent and provocative. Others feature sing-song end rhymes, excessive use of abstractions, and antiquated diction.

With some prudent editing, this collection could sparkle. As it stands, Lee has written some exciting and thought-provoking pieces in her book, which marks the debut of a poet to watch.