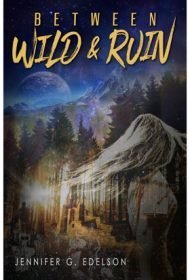 The story centers on Ruby, nearly 18, who has moved to La Luna, New Mexico with her aunt to repeat her senior year because of the tailspin she went into after her mother’s untimely death in Santa Monica, California.

In between cryptic sightings of her dead mother at a local, archaeological ruin and a gigantic mountain lion, Ruby is torn between three very different men, all in their early 20s. Angel is the nice guy, the protective yet kind sheriff’s deputy. Ezra is the wounded hottie, a local boy who returned from college with a scarred face and an even nastier attitude. And then there’s the exceedingly handsome Leo. Strangely, only Ruby can see him, and Ruby only runs into him when she’s hiking or sketching that local ruin.

What could be a corny premise turns into an exhilarating, fun ride in Edelson’s adept hands. Her characters are smartly drawn, and readers will easily identify with Ruby, a strong yet insecure young artist on the verge of adulthood, who is still recovering from her tragic past. Edelson paints a beautiful picture of a small yet ancient New Mexican town, but it’s her spot-on, delicious dialogue that truly makes the book stand out. For example: “It’s kind of exciting,” Ashley says. “I mean, what if he’s the ghost of a Confederate soldier?” “Union,” Marta corrects her. “If Ruby’s gonna mack on a ghost, he better be Union.”

Fans of Twilight and modern fairy tales will fall in love with Ruby and root for her eventual romance. The only complaint—albeit minor—is the book’s slightly unsatisfying explanation/climax in which readers learn how Ezra became scarred.

That said, this is a lovely story with Native American lore skillfully woven into the narrative. Happily, the book’s ending hints that this standalone novel could become a series.