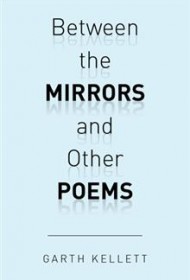 Between the Mirrors and Other Poems is a poetic potpourri, including ruminations on identity, perception, human relationships, loss, and death.

In Garth Kellet’s collection, poems are written in both free verse and rhyme. While the majority are self-referential, a few turn outward to consider cultural figures, both imagined and real, including the recurring character of Friday from Robinson Crusoe.  Of him, Kellett writes: “Friday was not fazed, no,/ nor out of date./ His picture looked primitive, but it has stayed.”

Two stylistic patterns dominate this collection.  Many poems are generic in their emotional presentation and lacking in contextualizing details.  For instance, “Of all that I have earned or tricked,/ I love you most of all,/ and that now, coming within my reach,/ fixed in my heart/ is all of you.” Readers gain no unique insights into this speaker or the relationship at hand, precluding a deeper engagement with the feelings expressed.

Other poems are highly cerebral, paying less attention to the poetic values of sound, image, and feeling. For example: “Sleep, don’t we know it, requires no philosophy/ and no ambition, no responsibility./ […]  What we want and need is unfettered,/ uninterrupted, heavenly oblivion.”  As intellectual exercises, such poems might be more effective as prose.

The rationale for the arrangement of this collection is also not apparent. The title poem begins with a speaker “standing between the bathroom mirrors,” contemplating his past and future selves; the concluding poem, called “The Argument,” discusses a friendship threatened by an unspecified disagreement. In between, figures as diverse as Sleeping Beauty, Lazarus, Frida Kahlo, and Da Vinci’s Mona Lisa, make cursory cameos.  No strong narrative emerges to anchor the collection, and there are no thematic sub-sections, leaving readers feeling unmoored.

While these poems reflect Kellett’s range of interests and knowledge, the book lacks a clear focus and enough specific, satisfying details to secure a reader’s deep investment. Ultimately, such issues are likely to limit the collection’s overall appeal.