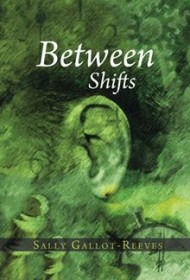 Between Shifts is an absorbing, fiercely emotional, yet pensive collection of poems by Sally Gallot-Reeves, an undeniably impressive writer who often uses experiences in health care as the matrix for her verse.

Gallot-Reeves looks squarely at intense situations (patients poised on the cusp of death, a surviving intoxicated driver, victims of collision) without exploiting our emotions or resorting to hackneyed homilies. Poems dealing with issues outside the realm of caretaker set the bar equally high: estrangement, intimacy, disillusionment, rape.

The author has an intuitive feel for finding the lost, distraught and miserable, and describing their predicaments with calm, sober intelligence and breathtaking insight. In “healing,” she confides the last hours of Michael — how those around him ignore catastrophe to focus on comforting him. “He had been dying I knew, /and in the deepest hours of the city night/they helped his mother/crawl in bed beside him./ Michael in her arms to shield him/ from the therapeutic world.” Gallot-Reeves has created a kind of pieta here, an exquisite and unexpected touch, with the added irony of suggesting Michael must be protected from those who are trying to save him.

In some poems, Between Shifts leans more towards the editorial than image-driven. However sharp, these pieces miss the opportunity for evocative detail and metaphor. Also, Gallot-Reeves might consider a more purposeful manipulation of line-breaks. In “cancer,” we read: “They face the habitual fog/arising from the lake water/drifting across their visionary stage…” How much more effective might these lines be, were she to parse them differently: “They face the habitual/fog arising/from the lake/water drifting across/their visionary stage…” With a bit of tinkering, the reader’s attention can be drawn to embedded ideas and symbols beyond linear logic.

Nonetheless, Between Shifts is a pleasurable, profoundly moving experience, brimming with nuanced, captivating verse. Avid though understated, original, incisive and palpably human, it belongs on the bookshelves of those who love contemporary poetry.