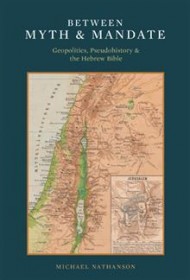 Border disputes are one of the primary reasons for conflicts between nations and neighbors. Few disagreements have been more heated or polarizing than the Israeli-Palestinian Conflict over territories in the Middle East that Jews believed were historically preordained for them in the Bible. Or were they?

In Between Myth and Mandate author Michael Nathanson, a graduate of Hebrew University Medical School in Jerusalem and now a retired physician, argues that the Hebrew Bible should not be read as a work of history, but as a complex series of politically motivated stories that were constructed over time to unify a people; stories that were meant to give meaning to suffering and victory, but not to be recorded as fact. To view the travails of Noah or the heroism of Moses or David as history, he argues, is little more than fundamentalism, which can, and has, lead to disastrous consequences.

He writes: “To trivialize the [Biblical] narratives by treating them as literal accounts of unwitnessed events of prehistorical times is to repudiate their authors’ intent to use ready-made myths as metaphors for their ideas and notions about their own universe.”

Well versed in the Prophetic and Wisdom traditions of the Bible, Nathanson provides a probing assessment of the Exodus, Conquest, Judges and Monarchy narratives in an effort to illuminate the development of the Hebrews’ understanding of their culture and politics. Unfortunately, Nathanson contests, “the Hebrew Bible continues to be taught and misleadingly interpreted in a manner that denies other, evidence based, narratives and therefore the historical right of the indigenous non-Jewish population in Palestine to create their own state according to UN resolution 181.” This has contributed to the sectarian violence and broken peace agreements over many generations.

Though the material is dense and specialized, Nathanson’s approach is intelligent, informative, and methodical; his prose is clear and erudite. Overall, Between Myth and Mandate is a thought-provoking, investigative work and could make a useful reference book for those interested in the geopolitics of the Hebrew Bible.