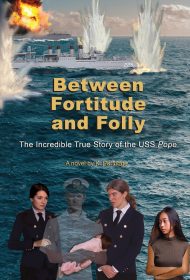 Between Fortitude and Folly, by K. Partridge, is an historical novel that recounts the captivating story of the fight for survival by the USS Pope, an obsolete destroyer desperately pressed into service during WWII’s first months in the South Pacific.

As the Japanese blitzed the out-manned American and Allied forces, the Pope’s crew bravely fought on, attacking or dodging the newer and better Japanese ships. Inevitably, after only four months of harrowing combat, three hours of pounding by enemy gunfire sank her. The surviving crew spent 60 hours in lifeboats before a Japanese destroyer rescued them.

The novel gives proper due to both the characters and the history. Readers are immersed in the terrifying realities of war. The author describes the intricacies of operating a 315-foot warship precisely and accurately. From weapons and propulsion to navigation and even berthing, readers encounter a world usually experienced only by sailors. Maps, diagrams and other graphics help readers grasp the unique feel of a warship in battle.

But while details of parabolic distances and fuse times are central to the construction of a compelling story, Partridge’s skillful creation of credible, conflicted and fearful characters bring it all alive. Main protagonists, Ensign Jack De Vries and two Australian signalwomen, Margaret Martin and Dorothy Walker, ride a roller-coaster of emotions and passions in a world in which a Japanese victory appears certain. The two women, whose job ashore is to monitor ships’ at-sea transmissions, meet the sociable, caring and attractive Jack at an Allied naval base where the Pope was home-ported. A love story unfolds, but with which one?

Readers will stand with De Vries on the Pope’s deck as eight-inch enemy shells roar down on the ship, sounding like, “gravel in a chute.” The dialogue and narrative skillfully re-create the era and convey the story’s tensions.

Partridge dedicates “this novel to the officers and men of the USS Pope. I hope it does them justice.” Indeed, it does.