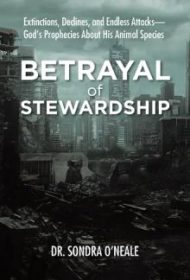 “Planet Earth is dying—or rather human beings are killing it,” writes Dr. Sondra O’Neale in a timely, impassioned work that looks to bring awareness to the atrocities being perpetuated on the Earth’s animals and its environment. Mixing theological insights with contemporary scientific information on global warming and the mass extinction of species of mammals, birds, sea creatures, and insects, O’Neale puts a Christian spin on her research, arguing that humans are neglecting their divinely ordained responsibility to be good stewards of God’s creations, which in turn is ushering in Armageddon.

This argument is not new. However, what makes O’Neale’s book unique is that she focuses attention on how the animal kingdom is fighting back against their human aggressors. Bear attacks are on the rise, as are coyote attacks in urban areas like Chicago, and feral pigs in the U.S. are reproducing at such an alarming rate that their invasion of suburban areas and farmland is devastating livestock and agriculture. O’Neale contends that these increases align with Revelation 6:8 that describes how one of the Four Horsemen of the Apocalypse will use “wild beasts as part of the arsenals to kill millions of people.”

O’Neale is a solid writer and is well-versed in Biblical and prophetic literature. She argues her points with clarity, and draws supporting details from scripture, newspapers, and scientific journals. While the author posits that we are currently in a doomsday situation, she also believes in hope. She calls on Christians to pray more and to take practical measures to improve the environment, including changing driving habits, limiting use of plastics, and pressuring federal agencies to enact change. Some of these ideas might seem like no-brainers, but O’Neale would argue that that’s the point. Many of us have not been using our brains to protect God’s creation.

Overall, all this is a thought-provoking work with real-life applications. It will appeal to many Christians, especially those interested in eschatological studies.