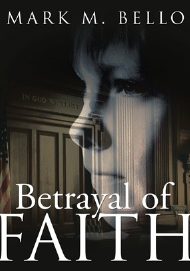 In this legal thriller, a young widow and her two sons are pitted against the Catholic Church in a battle that turns murderous.

As the story opens, Jennifer Tracey picks up her two sons, Jake and Kenny, from a camping trip with the new parish priest Father Gerry Bartholomew. Almost immediately, Jennifer senses something is wrong, but her sons refuse to talk. When Father Gerry visits, the boys are rude and decline dinner. Eventually, through a therapist’s assistance, the boys acknowledge they were sexually molested by the priest, prompting Jennifer to pursue the priest through the legal system.

Meanwhile, a covert church group known only as the “Coalition,” learns of the trouble – this isn’t the first time Father Gerry has molested boys – and aims to address the problem while protecting the church. It’s clear that the Coalition will stop at almost nothing to achieve their means.

This is a detailed story in which the author establishes each plot point with care. The characters are well drawn: The Tracey family members are sympathetic, the Coalition and Father Gerry sinister. But Bello’s strength in plotting can also be his weakness. The plot moves at a painstakingly slow pace, with information offered, then repeated later in extensive detail in nearly 100 pages of court proceedings.

Technical issues are also distracting. The author overuses adverbs, particularly in quote attribution, such as:  “Kenny spoke, lethargically”;  “said Kenny impassively”; “said Jake, spiritless” (all appear in one short passage). There are also jarring shifts in point of view. At one point, we are in Father Gerry’s head as he shamelessly considers his fondness for children. In the next sentence, the point of view becomes omniscient: “He was, unquestionably, a sociopath.” Then we are back in his head:  “What he did to children … was beautiful.”

The story would be enhanced with better editing. Still, those willing to overlook the stated issues will enjoy an engaging cast of characters involved in a high stakes situation.