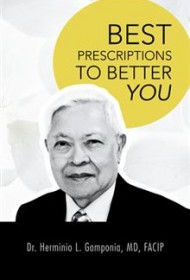 Best Prescriptions to Better You is a collection of short essays, prayers, acrostics and quotes intended to inspire readers. It’s a nice, upbeat idea, though the execution sometimes falls short of the material’s potential.

Author Herminio L. Gamponia includes some personal stories—he was a physician for many years, hence the “prescription” in the title. Much of the book consists of short anecdotes and quotes that advocate a strong Christian faith and New-Age-leaning beliefs, a stance that seems contradictory at times.

Chapter Two, for example, reprints the Ten Commandments and several other Bible verses. Later chapters quote from Dr. Wayne Dyer and discuss auras and energy healing. Gamponia writes at one point that “some people believe” hurricanes Andrew and Katrina might be God’s retribution for legalized abortion or prohibiting the display of the Ten Commandments. It’s an incendiary statement, dropped in without comment, and would appear to be an endorsement. Christian readers might agree, but it’s unlikely those with a New Age bent will approve of such a harsh statement.

Several chapters contain acrostics, where a word or concept is defined with a list of terms whose letters spell it out. For instance, “Success” is made up of “Setting goals,” “Understanding,” “Concentrate” [sic], etc. It’s clever and fun, but overused (“THE GOOD DOCTOR,” for instance, takes many letters to define).

Prescription is well intentioned but could use more editorial polish. The book’s chapters aren’t organized cohesively. (For instance, Chapter Two simply reprints the Ten Commandments and Bible verses without author elaboration; whereas, other chapters are written in the author’s voice.) The writing mechanics suffer from inconsistencies as well. (The chapter that offers a “prescription” for teachers begins: “In the following, the word “I” refers to the teacher.” It then goes on to use “I” to refer to both the teacher and Gamponia.)

Despite such issues, readers looking for inspiration may enjoy the short chapters and accessible ideas here.