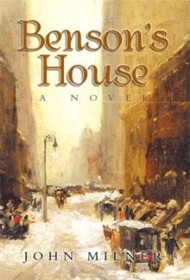 The story begins in late 1863 with the meeting in Manhattan of illiterate Civil War veteran Justin Benson and real-estate heiress Sarah Taggart. Sarah’s father disapproves of her intention to pursue a career as a painter, but after she has a triumphant gallery exhibition, he relents and buys the soon-to-be married couple a building on Bleecker Street to serve as their home, Sarah’s studio, and—after the Bensons see a troupe of former slaves performing in Central Park—a tavern showcasing “the music for a new tomorrow.”

Sarah dies in childbirth, but the “urban romantic movement” launched by her paintings lives on in the music performed at the Benson Inn, where bluesman TJ Hardy starts a tradition by leaving his guitar onstage and instructing, “Jus’ go on an’ leave it case som’one needs ta play.” Audiences will roar that tag line through the decades, which whiz by with increasing speed as five generations of Bensons keep the faith and play the people’s music.

Unfortunately, it’s impossible to keep the names of those many generations of characters straight. Few of them have fully fleshed personalities, and they get lost in a welter of cameo appearances by everyone from Herman Melville to John Lennon, with a lot of fairly obscure left-wing icons in between. Milner’s passion for music and justice is commendable, but he struggles to convey it in awkward prose that includes some bizarrely stilted (and anachronistic) dialogue, as when a black teacher foresees in 1869 that “Entertainment and sports will, one day, serve as leisurely provisions to these rights for a free and exultant lifestyle of every man of all color equally.”

There are many interesting ideas here, but ultimately they are poorly served by the story’s execution.