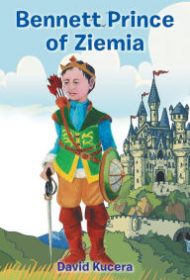 In David Kucera’s fantasy novel for young teens, a 13-year-old prince sets out on a dangerous mission alongside a beautiful maiden to retrieve a valuable magical artifact.

Prince Bennett has lived a life of luxury in his kingdom of Ziemia, but he longs to engage with the real world and prove his mettle as a knight. He persuades his parents to allow him to accompany his uncle on a mission to rid the kingdom of bandits. Along the way, he meets a beautiful maiden named Melissa, and he’s so taken with her that he agrees to help search for her missing cousins.

When a powerful magical artifact called the Zoldox is stolen from the kingdom, leaving it vulnerable to wicked creatures known as Edu, Bennett and Melissa’s journey takes on new urgency. They fight their way through the Edu within mountain caverns, and face the threat of bandits on the other side. Their hope of success is dashed when they’re taken captive by a notorious bandit, and Bennett must rely on his wit and his friendship with Melissa to survive.

Though Bennett Prince of Ziemia has the elements of an engaging fantasy story—spoiled prince, beautiful maiden, monsters, bandits, and magic—the writing is so dry and mechanical that the story falls flat. The chapters unload a lot of information, telling readers a great deal, but failing to portray the world, the characters, or the adventure in a compelling way. For example, the opening chapter speeds through the history of Ziemia, offering needless information while glossing over interesting and relevant details. Moralistic speeches cause the story to drag, such as the long-winded advice given by Bennett’s uncle when Bennett wants to spend his money frivolously.

Overall, what could be a charming fantasy for younger readers fails to create a fresh and vibrant world for its audience.