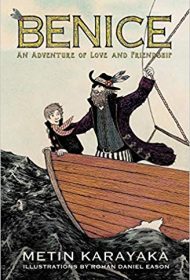 Benice: An Adventure of Love and Friendship is a middle-grade pirate novel that combines a page-turning story of secret quests and abductions with a strong and heartwarming message about family and friendship.

Levend is a 12-year-old boy when he befriends a reclusive fisherman, Mr. Ben (later referred to as Mr. Ice), a man with only one leg, one hand and one eye. Many of the villagers in Yalova are suspicious of Mr. Ben, but Levend and the old man strike up a friendship. When Levend discovers the “sea bubble,” a magical material that allows him to deep-sea dive without requiring oxygen, Mr Ben involves him in a pirate feud and a quest for a life-saving elixir.

This is a novel of two parts. For the first half, Levend, now an adult, recounts his adventure to a group of children that fish, as he once did, on the jetty in Yalova. Then his friend Orion takes over as narrator, filling in the story of Mr. Ben. Event-filled and charmingly told, the novel has a traditional feel to it, enhanced by high-quality illustrations at the start of each new chapter. Minor characters provide humor, as well as contributing to the parenting/family theme: for example, the kidnapped twins, Little Fan Fan and Giant Yang Yang, and Zamora, the disappointing son of pirate captain Jamoka.

The change in narrator is initially confusing. Orion takes up his part in the tale at a point when it is unclear what his connection to Levend is. The large cast of characters, many with outlandish names, may also confuse some readers. Soon, however, it all comes together as Orion reveals the truth about Mr. Ben and brings Levend’s adventures to a satisfying conclusion.

Overall, this a thoroughly enjoyable story: inventive and whimsical in tone and positive in message. It’s an uplifting read that should appeal to younger readers, particularly, but not exclusively, boys.