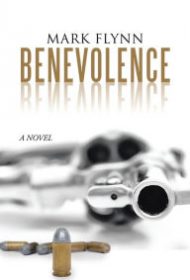 Debut novelist Mark Flynn launches an ambitious thriller series with this story of a small-town lawyer enveloped in an epic biblical conspiracy.

Chad Hampton is an ambitious southern attorney tasked with talking local citizens out of their homes so his firm can build a highway bypass. He’s a family man and devout Christian, however, his view of the town locals as “hillbillies” betrays a deep hubris. While offering the locals meager payment for their homes, he couches his arguments in the concept of religious benevolence: accepting gifts that show the true love of a Christian. In this way, Chad has bilked these good neighbors out of their homes, save one.

The holdout is William Lohman, a suicidal WWII veteran and fiery atheist who chooses Chad to witness his darkest secret, promising the lawyer his home if he hears him out. First, William reveals a nightmarish coming-of-age, from his father’s suicide to the death of his first love in a terrible storm. The novel then takes a radical left turn into Da Vinci Code territory, as William reveals his role in a secret mission during the war in which he and his fellow soldiers uncovered artifacts of unparalleled consequence whose revelation could upend mankind’s knowledge of and faith in Christianity.

In unraveling this byzantine, mystical conspiracy, Flynn takes a deep dive into truly obscure corners of Christian mythology. The book’s celestial conjectures about the nature of God may require quite a leap of faith for more conventional readers. Fortunately, the author has embedded his revelations in a solid drama marred only by occasional grammatical errors. Chad is a serviceable if somewhat mundane protagonist, but William Lohman is a fire-and-brimstone iconoclast in the vein of Cormac McCarthy or Daniel Woodrell, and his unlikely redemption is a fascinating journey to experience.

A dubious final twist may raise some eyebrows, but readers who enjoy this genre will find that the cliffhanger ending leaves them eager for the sequel.