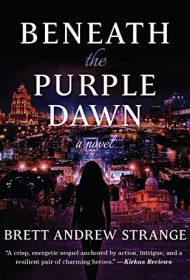 This thrilling, well-executed tale of international espionage pits a small group of independent fighters against a mastermind terrorist.

After the events of Brett Andrew Strange’s former book, Against the Dusk, Katya Volkova is training herself to fight the shadowy villain Perses, who tortured her after killing her family. Her lover, American war veteran Paul Drake, is equally committed to taking down Perses and the hub supporting brutal wars across the Middle East.

Katya and Paul recruit allies in the U.S. government and plot strategy, but Perses and his network of arms dealers, money launderers, smugglers, and spies always seem one step ahead of them. Justice blurs with revenge as Paul’s ragtag group has one last chance to stop Perses and save unknown lives — but the gamble comes at a high price.

The novel globetrots from the deserts of California to the deserts of Syria, from posh avenues in Paris to the ancient streets of Malta, with the action tense and urgent throughout. Employing taut, clean prose and a tightly woven plot, Strange tells a story worthy of the big screen, showing a grasp of global geopolitics as well as fighting tactics, weaponry, and the intelligence world.

Glimpses of glamor and bursts of stunning violence don’t overshadow the layered, likeable characters or the high stakes. Paul has sacrificed ties with all he knows to trust Katya’s handlers, a pair of canny Russians whose motives are never quite clear. Katya is both preternaturally beautiful and highly adept, and ready to give her life to bring down the men who killed her family. The bad guys are dimensional and truly terrifying in their lust for power and love of chaos, yet Strange offers glimpses of beauty and elusive meaning against the backdrop of loss, blood, danger, and sacrifice.

In a crowded genre, Beneath the Purple Dawn is gripping and memorable.

Highly recommended for fans of James Bond and Mission Impossible.

Also available in ebook and audiobook.