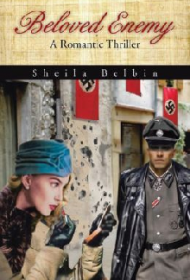 A tale of love and loss during wartime, Beloved Enemy is a romantic thriller that features one young woman who risks everything to spy on the Germans during World War II.

Allison is half-German, a fact that she’s kept from most of her friends and colleagues. When she’s asked to go behind enemy lines, into Nazi Germany, to spy on a Nazi officer, she is glad to do her part. But what Allison doesn’t realize is that she might come to care for this man, and that her actions will haunt her for years to come.

Allison is an intriguing character in Beloved Enemy. She is strong, yet also vulnerable as she becomes conflicted about her mission. The story is told as a flashback, years later, and it’s clear that Allison has been forever changed by what happened in Germany. Readers will quickly become engrossed in the story and emotionally invested in Allison, as they hope she’ll find a happy ending and come to terms with her past, despite the horrors she must face. The secondary characters are also interesting; the author does a solid job examining the effects of war on ordinary people.

The narrative writing in Beloved Enemy is sure-handed and polished, though some of the dialogue (such as “I must make an early start tomorrow because I have to collect the kids”) can be a bit wooden. Despite some jarring moments — for instance, the seemingly rushed ending — the story is engaging and entertaining. Fans of romantic thrillers will enjoy immersing themselves in this complex and well-written novel.