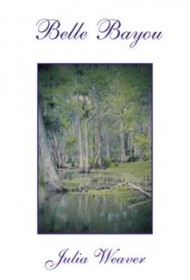 Julia Weaver has crafted a mostly satisfying tale in Belle Bayou, a slim and engaging romance novel with all the expected elements of the genre.

As Belle Bayou opens, Valerie Le Fountaine is a modern-day renaissance woman living in New Orleans. She runs her own accounting business, has a passion for archeology and is accomplished enough at the piano to sit in with the jazz musicians at her aunt’s supper club. The one thing missing in her full but rather predictable existence is romance.

That is about to change when all the pieces of her life converge into a harrowing adventure complete with alligator poachers, hidden treasure, a murder mystery – and a handsome man from her past.

Weaver’s main character is likable and the author does a good job of mixing several storylines into one that does not seem forced or illogical. The minor characters are also fun and eclectic, much like the city of New Orleans itself. The strength of the tale is not necessarily in the writing – which is serviceable but neither highly descriptive nor surprising – but in plot development, although unfortunately the climactic scene feels rushed; after so much build-up, it is disappointing to have Valerie’s peril given short shrift.

Another quibble is the author’s use of the word “Negro.” Black characters are described as the “old Negro gentleman” or “a giant Negro.” It might have been acceptable had she been writing a period piece or if she was trying to convey regionalism from the Old South. But the book is set in modern times without much attempt to capture the language of New Orleans. Her use of what many will see as a racist word is jarring.

Still, despite off-putting language and rather straightforward writing, this story provides a pleasant read for its target audience.