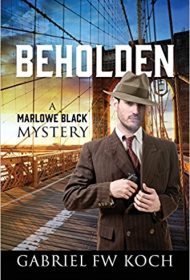 A hardnosed WWII veteran turned private eye gets involved with the mob, Nazis and a trove of stolen gold coins in this rip-roaring detective novel by Gabriel F.W. Koch, a gifted genre writer who has also dabbled in sci-fi and fantasy.

Here, Koch stays firmly rooted in Manhattan circa 1950, where private detective Marlowe Black is having a very bad day. A former double agent, Gregory Twiggs, has turned up strangled and dumped in Black’s office. Black is quickly contacted by a Department of Treasury agent, who hires him to investigate Twiggs’ murder—and soon after is approached by femme fatale Stella Vichery to find a $1 million stash of gold coins purloined from her banker father.

From here, Koch does a masterful job of raising tension and painting a picture of post-war Manhattan: “The Bowery seemed lined with faces that carried the look of death warmed over,” Black muses. “Too many good men who had returned from war with a hole sliced out of their souls, now slipped down the neck of a whiskey bottle each night to escape the nightmares of remembrance.”

Black is a classic antihero a la Phillip Marlowe or Mike Hammer, a Colt-toting blunt instrument for whom all women are “dolls” or “dames” and any guy he doesn’t know is “pal.” Fans of noir and crime fiction will be delighted as Black rubs elbows and trades blows with mobsters, cops, prostitutes and spies.  Along the way, he engages in multiple firefights, a surprising amount of detective work, and a satisfying plethora of Nazi-punching. As his two cases intertwine, the private eye gets increasingly closer to solving them both.

This is a barn-burner story, marred only by an abrupt ending that suits the novel’s cynical hero but leaves a few narrative threads unresolved. Nonetheless, it’s a meaty, propulsive narrative that combines the classic tropes of crime fiction and spy novels into a truly engaging read.