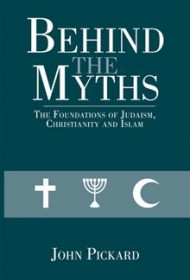 John Pickard’s Behind the Myths: The Foundations of Judaism, Christianity, and Islam is an ambitious work. In it, he argues that the three biggest religions are little more than stories promulgated throughout the centuries, not because of divine intervention or inspiration, but for sociological and political reasons.

This is not a new argument, but few books provide the wealth of historical details that Pickard’s does. Materialist in his worldview, Marxist in his approach, Pickard writes in his introduction that he is not looking to write a manifesto to convert believers into atheists; he’s looking to enter into discussion with like-minded secularists and atheists.

Examining geographical, historical, and political evidence, the author points out copious examples of incongruence in the three faiths, including anachronisms in the Bible about when certain enemies of the Hebrews lived; the messianic fervor in first century Palestine and lack of historical evidence for Jesus; and differing opinions on who wrote the Koran.

All of this makes for interesting, but not easy reading. While Pickard has an erudite style, his sometimes-dense prose is often in need of stringent editing. Many of his lines are grammatically convoluted and there is quite a bit of repetition throughout the book.

Moreover, this density limits the audience of the book. Beyond the Myths is rather academic in tone, yet it doesn’t appear that the author is an academic (there’s no biographical information on Pickard), so colleges and universities aren’t likely to use it. And yet the book is too high-brow for general readers, so it ends up in a kind of literary no-man’s land. This is a shame because readers can learn much about the political and social origins of religion from Pickard’s exhaustive effort, but they need to be fully committed to the text to do so.

Ultimately, this is a solid, yet slightly flawed, work for specialized readers.