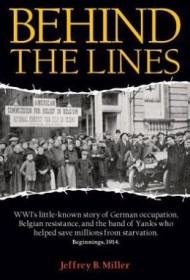 One of the historian’s jobs is to take all the shards—all the accounts, statistics, stories, and documents of a particular time—and make them click into place like a pattern in a kaleidoscope. Jeffrey B. Miller does this admirably in Behind the Lines.

Miller’s history primarily concerns the Commission for Relief in Belgium (CRB), the privately run organization that kept a whole nation from starving during WWI.  At the beginning of the war, the Germans marched into neutral Belgium, leveling cities and requisitioning supplies.  No new food could reach the country because the allies had blocked the seaways, and the Germans did not feel it was their duty to feed the Belgians.

Herbert Hoover (15 years before becoming a U.S. president) and a group diplomats and American citizens stepped up, forming the CRB.  Miller outlines the enormous financial, diplomatic, and organizational hurdles the group had to overcome in order to transport tons of food to famine-threatened Belgium and places this relief effort within the disparate contexts of a war-ravaged country, a nascent Belgium resistance, feuding men of power, and the young idealists (Rhodes Scholars) who made sure that the supplies reached their intended recipients.

Miller discloses the details with a master’s touch for synecdoche.  For instance, on a gray day just after a bombardment, a Belgium nurse finds a yellow canary and cradles it in her hands, thinking of “all the young soldiers she had tended….” In addition to his metaphoric distillations, he also provides a shrewd analysis of the leaders connected with the CRB.  Particularly, he reveals Herbert Hoover’s autocratic and manipulative tendencies as well as his humanitarian ones.

Miller’s deft account of the CRB and its milieu unfortunately ends in early 1915, although the commission continued on well after the Armistice of 1918.  Miller, however, hints of a second book in his final pages, so readers may look forward to a continuation of this intriguing story.

Author Platform: This book has won numerous awards, including Best Books of 2014 (Indie), Kirkus Reviews and is a finalist for INDIEFAB Book of the Year Awards 2015.