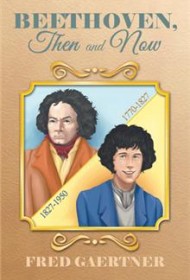 The life of Ludwig von Beethoven was both triumphant and semi-tragic, befitting a great genius; but what if the master composer could reincarnate with his same genius and aspirations, and find what eluded him the first time: heartfelt love from an equally talented woman?

Fantasy author Fred Gaertner makes this happen in a two-part tome. In Part One, we see Beethoven as he might have seen himself: gradually realizing his gifts, studying and performing with the best musicians of his day and achieving universal accolades. Mixing fact with bold, at times charming, speculation, Gaertner invokes our sympathies for a man who was boundlessly fortunate in career, but a hapless failure in love.

In Part Two, we meet 17-year-old, modern Paul Rezler, who is caught up in an arcane cosmic web and has the privilege of being “reborn” as Beethoven: “He had awakened…with his usual zero interest in music. Now he is the greatest Earth-musician yet to live.” Rezler/Beethoven bounces from the 1800s to the 1950s, discovering ever deepening musical and romantic expression. The final surprise? The identity of his newfound lover.

Gaertner, himself a musician, takes his admiration for Beethoven to the next level, boosting the musician’s potential, both musically and in matters of the heart, beyond the limitations of a single life. Part One is erudite, overly ponderous at times, showing a scholarly bent; Part Two adds liberal doses of humor and romance to spice up the story. Many may find the narrative daunting at 600+ pages and disjointed as it recreates Beethoven in two wildly divergent settings; offers musical minutiae; postulates a unique method for spiritual rebirth; and reprises the spiritual guide, Aaron the Wayshower, from the author’s previous novels, to oversee the proceedings.

The story isn’t for everyone. But fans of Gaertner’s earlier fantasy novels and musical productions, and those who want to learn more about Beethoven and are patient with the story’s disparate elements, may appreciate this novel.