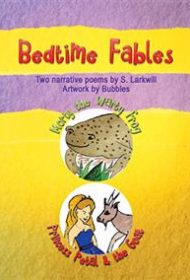 The first, “Morty the Warty Frog,” plays with the familiar theme of finding acceptance for one’s physical attributes. Here, Morty is shunned by green frogs because he is brown and has warts. When he meets some toads, though, he finds approval.

The second, “Princess Petal & the Goat,” recounts the courtship of a princess by a demanding, rude prince in search of a bride. When the princess resists his command to marry him, he throws a sack over her head and tries to abduct her. But a goat rescues the princess. Kissed by the appreciative princess, the goat turns into Prince Charming.  Meanwhile, at story’s end, the first prince finds another princess to wed.

The author writes both stories with a sense of fun and packs some delightful language into the rhymes. For instance, in “Morty,” Larkwill writes, “Then suddenly, hopping in front of his face,/ a girl toad appeared with considerable grace./ With a wink of one eye and a stunning vogue pose,/ she flicked her long hair and said, ‘Hi there. I’m Rose.’”

The lighthearted tone, however, is ill-suited for the dark plot of “Princess Petal & the Goat.” Such upbeat lines as, “The dust was so thick – they say it was silly./ Who won the fight? Was it Bob or brave Billy?” are at odds with the story’s troubling underlying themes of abusive behavior toward women.

The book is also flawed by occasional uneven rhythms that make reading aloud challenging (“Morty learnt he was a toad on that night,/ as they danced to a beat till the new day’s light.”). Illustrations often lack sharpness and are sometimes distorted by the fold when they cross a two-page spread.

Thanks to its lively language, the book may hold some appeal as a read-aloud for youngsters. But revision, particularly with attention to tone and message when showing abusive behavior, would greatly improve this offering.