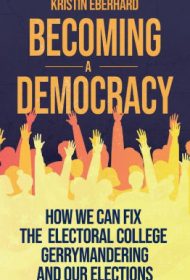 While it could have been a wonky bore, Becoming a Democracy is, instead, a lively roadmap for political activists aiming to make America politically progressive.

In this volume, Kristin Eberhard’s full plate of reforms includes standard items such as electing the president by popular vote, muting the importance of the Electoral College and strengthening “vote at home” options, such as mail-in-ballots. She also offers ideas that are more innovative —or radical, depending on your viewpoint—such as abolishing the Senate, which she calls the “most powerful undemocratic body in the world,” or redrawing state lines (“the Great Redraw”) to make them more equal in population.

This is an easy, informative read. Eberhard provides case studies, friendly graphics, and chapter-ending summaries and discussion questions. She doesn’t simply lay out goals, but provides practical implementation tactics. For example, she discusses the Honest Elections Seattle campaign that gives every registered voter—”barista or banker, janitor or judge”—four $25 “Democracy Vouchers,” funded by property taxes, to contribute to local elective candidates. The program is designed to limit the influence of special interest campaign donations.

Eberhard, who is Director of Climate and Democracy at the Seattle-based Sightline Institute, notes that her book will resonate with the political left but also declares that “If you lean right, this book is also for you!” because of the vacuum left by the decline of the “center-right party,” (read: Republicans). In this, she misses the mark. She is clearly advancing a strong progressive agenda (rather than a centered mission), including electing more women and minorities, and arguing that the system is “rigged” against “diverse, urban and progressive” voters. And she fails to meet some of the right’s arguments against that agenda, such as how mail-in voting fails to preserve the chain of custody and, thus, invites voter fraud.

Nonetheless, this is a valuable game plan for progressives. And conservatives will find useful insight into the ideas percolating in the country’s left wing.