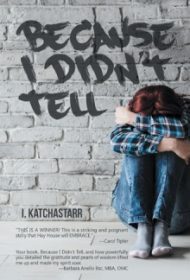 Rape and child abuse are a one-two punch no person should suffer. In Because I Didn’t Tell, author I. Katchastarr details the nightmare she lived through and ultimately escaped from.

Katchastarr’s story opens with her sharing a platonic dinner date with an ex-boyfriend. Instead of parting as friends, he violently rapes her, an attack that leaves her pregnant and bewildered. Her ex is a master manipulator who manages to learn this news and forces her into marriage at literal gunpoint. Their life together is miserable, and soon there’s reason to suspect he’s sexually abusing their infant daughter. Under threats that he would kill her, their child, and her whole family if she told anyone what was happening, Katchastarr alienates her worried parents and struggles to secure a divorce and finally escape her abuser.

Each chapter ends with a list of things the author can now forgive herself for, such as believing the threats and not divulging what was happening sooner. She follows them with a positive affirmation of self-worth.

Part of the book’s strength is its first-person narration; hearing the story from one who lived through it is undeniably gripping. But there are a few passages that could have been more explanatory, such as the one about the Canadian legal system forcing the author to allow her husband child visitations to collect evidence of abuse, a practice that seems ghoulish at best. Additionally, Katchastarr’s decision to give her ex the unlikely pseudonym Phidelopé and then refer to him with he, his, and him (all italicized), in order to anonymize him, simply draws more attention; thankfully it doesn’t greatly detract from the story’s impact.

Katchastarr shows growth over the course of the narrative, finally freeing herself and her children from their abuser and learning to empathize with him upon learning he was likely abused by his own father. Her story may comfort those similarly afflicted—and encourage aggrieved readers to speak up before a bad situation becomes worse.