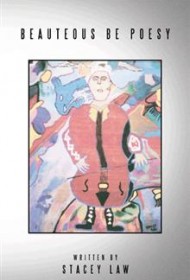 Upon opening Beauteous Be Poesy, readers are met by a biography of the author made up of jumbled and often grammatically incorrect prose, such as the first sentence, “Loving poetics I am an author that has published in several anthologies for contest poems centered around self love of poetry.” It takes effort and mental rewriting to guess at what Law actually means.

Interestingly, though, away from the prose-related burdens of conventional syntax and standard punctuation, once one begins to read the actual poems, such as “Curiosity,” one is met by lines such as: “My senses are alert–The world I own / I feel for thee–I taste thee / Now I hold the key to then see / Curiosity–still wondering the truth”. In this poem, Law’s language actually has a rhythmic playfulness. The lack of commas, semi-colons, periods, and the like create a forward motion that, along with the occasional end rhymes, results in a sing-song-y pattern that aligns with the poem’s purpose.

Despite such moments, overall, the language in this book is sentimental, affected and vague, as in the poem “Petals of the Rose” in which Law writes “Beauteous be the significance of a precious rose / Special be the meaning of the romantic power.”

In addition, one phenomenon must be examined, and that is the frequent use of “thee” throughout the book. In English’s past, “thee” was a more formal address and “thou” was the more intimate, but here Law (over)uses “thee” within intimate contexts. This is just one of the confusing and pretentious aspects of this book, which most often demonstrates the author’s lack of control over the English language introduced so clearly in the opening biography.