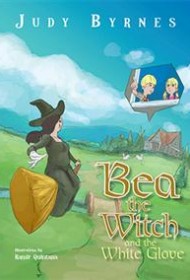 Bea the Witch and the White Glove is a straightforward children’s picture book focusing on the importance of keeping one’s space clean. While the illustrations are colorful and the book includes some effective storybook elements—magic, repetition, and good-natured humor—this book will serve as a better tool for adults than as entertainment for children.

Judy Byrnes prefaces her story with its origin: “Bea the Witch” was a game she created to encourage her children to keep their rooms tidy. Each week, she’d slip on a white glove and “become Bea,” turning an afternoon of cleaning into something fun and dynamic.

Thus the story: Bea is a friendly witch whom parents call upon to inspect children’s rooms with her “white glove” treatment. The children featured in this story aren’t allowed to play until Bea is satisfied that their rooms are pristine — no frantically made beds or piles of clothes allowed! Once Bea is content, she says her farewells and lets the children frolic. In a humorous twist, the children notice that the kitchen is also a mess and tease their mother about it.

The book’s premise and execution will primarily appeal to adults, not least because Bea’s incentives for cleanliness are very grown up: It allows you to sleep better, get higher grades, and choose your outfits more quickly. Though logical, such ideas won’t have immediate appeal for young children. The plot of the story is also lacking drama, as the sole purpose of the story is to pass Bea’s test.

This picture book will have difficultly hitting the mark with its intended young audience. That said, it could serve as a useful counterpart for parents interested in introducing the “Bea the Witch” game to children, especially very young readers.