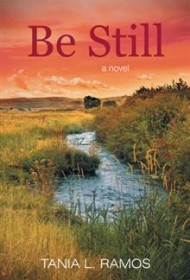 In Be Still, Tania L. Ramos’ novel, Dr. Jack Silver is a brilliant plastic surgeon, world-famous for his techniques and skill at putting traumatically injured bodies back together and giving his patients their lives back. But he has been walking through his own life in a kind of stupor for years, ever since the death of his infant daughter, followed by the death of his wife, Shannon, in a tragic car accident.

When he is diagnosed with Lou Gehrig’s disease, he takes the news much like he does everything in his life. Detached and unemotional, he can only look forward to seeing his beloved wife and daughter again. “I hope there’s some form of an afterlife,” he tells his friend and fellow physician, Christina Amity. “I hope there’s more to death than just dying and ceasing to exist.”

But there is something Silver must do before he gives in to the degenerative disease: make peace with his other child, Travis, now a grown man and an attorney who had distanced himself from his father ever since Shannon’s death.
Be Still is the story of a father’s desire to fix a broken relationship, his young friend who loves him like a father, and the son who won’t even take his phone calls. Travis and Christina must face Silver’s illness and impending death together, and their relationship forms the backbone for this novel.

In the tradition of Anne Tyler with a helping of Alice Hoffman, Ramos weaves a tale of love and loss, regret and rebirth. She manages to skillfully describe the afterlife that Silver sees as he moves toward the end of his life, and she creates effective tension between Travis and Christina as they both ready themselves for the death of someone they love. Be Still will appeal to readers who have lost a loved one or contemplated that loss, and Ramos deftly sets the stage for an afterlife that is both magical and realistic.