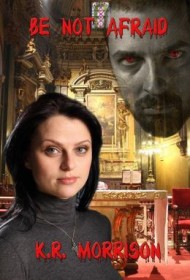 Although categorized as horror, K.R. Morrison’s debut novel is more appropriately described as an amalgam of vampire-powered dark fantasy and faith-based supernatural suspense — i.e.: Christian horror. While Morrison’s novel does little to expand or re-imagine the vampire mythos in any way, the sheer intimacy of the narrative is what powers this redemptive tale.

Lydia Bronson is a middle-aged woman with a loving husband and two kids in college. But above all else, she is a devout Christian. In the cubicle in the office where she works, she hangs her favorite scripture: “I can do all things in Christ who strengthens me.” But when she is brutally attacked and abducted by a sadistic vampire, her spiritual convictions are put to the ultimate test. Trapped in a dark, rat-infested basement where the vampiric demon feeds from her regularly, Lydia begins to question her faith and starts the nightmarish transformation into one of the undead. Then in a glorious vision, Lydia witnesses firsthand the crucifixion of Jesus, and after being literally saved by angels, she becomes one of God’s chosen messengers. The message is simple: A war is coming between good and evil. Prepare.

Because the vampiric elements of the novel are so commonplace, especially in today’s market where so many highly innovative vampire novels have been released (such as The Passage by Justin Cronin or The Greyfriar by Clay and Susan Griffith), hardcore fans of vampire fiction may find this novel a bit disappointing. In addition, the conclusion is predictable, and the narrative, at points, verges on proselytizing.

That said, Morrison does a commendable job with pacing, plotting, and creating characters that readers feel emotionally attached to, and fans of spiritually-themed, supernatural speculative fiction by authors like Frank E. Peretti will surely find this novel an entertaining metaphor for a faith-based existence.