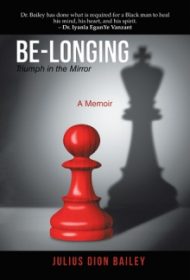 This memoir by Julius Dion Bailey takes readers from his troubling childhood through decades of depression, self-doubt and empty wandering as he seeks fulfillment.

Bailey, an associate professor of philosophy at Wittenberg University in Ohio, was born in Chicago. His parents never married and his father was absent, leaving Bailey in want of a strong male role model. As a child, he was molested by a babysitter and a series of other older girls in the neighborhood. This set the stage for years of a warped view of women and sex. Contributing to his difficulties were a defiant streak, weight problems and a stutter.

Only after more than 25 years of disastrous tendencies and disappointments—a reluctance to play by the rules, a failed marriage, frequent infidelities, an attraction to strippers and sex workers, an inability to commit—did Bailey find his way. It wasn’t a lightning-bolt moment; people suggested he needed professional help, and with the aid of a therapist and a longtime friend and confidant, he says he has beaten his demons.

Bailey is an intelligent writer who doesn’t sugarcoat his often-unflattering story. But at times, he devotes too much space to various sexual escapades, offering details that unnecessarily border on the salacious. Also, he includes a factual error, referring to Brother Rice High School as a Franciscan school where students wore brown robes. In fact, this school was staffed by the Christian Brothers of Ireland; students didn’t wear robes.

It’s unfortunate that Bailey took until his 40s to find his path. A longtime activist, lecturer and educator, he may have had an even bigger impact on society if he had resolved his problems earlier. Nonetheless, despite its drawbacks, his story provides an interesting read.