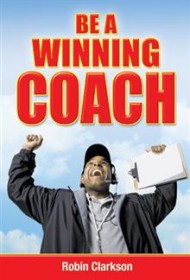 With its title and a cover depicting a man wearing a headset and holding a clipboard, Robin Clarkson’s Be a Winning Coach suggests it will cover a variety of sports. The book’s focus is actually is somewhat narrower. The majority of its specific instruction most closely relates to field hockey, though there is some crossover with sports with a similar setup, such as soccer.

Be a Winning Coach is divided into three parts: “The Winning Philosophy,” “Grow a Winning Organization,” and “Attain Your Aims.” Everything from training methods to game strategy is touched upon throughout. Principles addressed include releasing potential in players, remaining aggressive when your team has a solid lead, structuring practices for maximum benefit, and so on.

Clarkson’s bio notes that he has been coaching since 1988 (save a two-year break) and that he’s worked with male and female players from 14-year-olds to adults. While Clarkson doesn’t specify what sports that repertoire includes, the book suggests it’s mostly been field hockey.

The author provides salient advice on how a coach should visualize the type of team he or she wants to have, how to control the ball through the midfield, and to develop players through carefully designed practices Â¬— all solid, sensible advice. For all that valuable information, however, Be a Winning Coach is not structured in a way that clearly builds on its lessons as the reader progresses through it. It variably focuses on very specific circumstances and others that are broadly philosophical, instead of laying a foundation based on principles and getting more specific as it goes.

Ultimately, there’s not enough universally instructive tutelage in Be a Winning Coach to recommend it for all coaches, but despite the organizational issues, the book includes much advice that a field hockey coach could successfully implement.