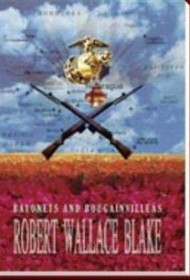 Robert Blake Sr. was a career Marine who served in the First and Second World Wars and spent significant time working for U.S. interests in Central America. His family moved around the country and world as his service dictated, which meant stints in Spain, Guam, and Quantico, Virginia, in between deployments, and occasional returns to the family homes in Seattle or Berkeley. Robert Jr. went with the family flow and has combined his own recollections with thorough research to create this portrait of his father.

Bayonets and Bougainvilleas draws from personal and military correspondence as well as family lore and photos to flesh out the details of their travels, and Robert Blake’s service record, which ended with his retirement in 1949 as a brigadier general. (He was promoted to major general immediately afterward, but kept at the retirement pay rate of a brigadier general, a somewhat backhanded promotion). The book is well written, and Blake injects humor and personality into the quieter moments, as when he recalls childhood play with a neighbor who “demonstrated socialistic tendencies toward my toys, whereas I had already developed a strong sense of private property.” The book could use more moments like that.

Blake is a fine writer, and his love and admiration for his father shine through here. However, the book rushes from war to vacation to school to deployment, jitterbugging about when cutting a few stories and spending more time on others would offer a more detailed picture of life in Seattle, in pre-Golden Gate Bridge San Francisco, or during times of war and peace. All are interesting, but we’re rushed past too quickly to “see” much.

If readers can overlook that flaw, Bayonets and Bougainvilleas offers history, travel and adventure, all wrapped in a loving tribute from son to father.

BlueInk Heads Up: Despite the hasty moves from place to place, there are some passages here that may be of interest to historians studying Seattle or the San Francisco Bay Area.