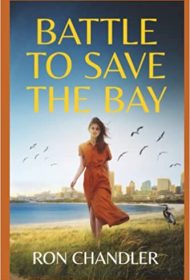 In Ron Chandler’s environmentally conscious novel Battle to Save the Bay, a feisty group of nature enthusiasts fight a corporation releasing toxic pollutants into the atmosphere.

Recent high school graduate Donna Burgess has landed a job with the Chesapeake Bay Coalition, an environmental group currently working to prove that the local Glendale Corporation is responsible for contaminating the bay. While gathering water samples to confirm the existence of toxins in the waterway, Donna and fellow Coalition members survive their boat’s capsizing. Soon, team members realize they are being followed, and there’s an attempted kidnapping. Donna begins to wonder if the Glendale Corporation is involved.

Fellow members also suspect that there might be a leak within the Coalition’s organization. When Donna is falsely accused of taking files, she sets out to prove her innocence.

Meanwhile, other events keep the pages turning: Donna is convinced to participate in a questionable breaking-and-entering escapade to rescue animals from a testing lab. (Here, Donna adopts the moniker “Wheel Girl” for her getaway driving skills.) And when Coalition members canvas neighborhoods to help fuel their case against Glendale, Donna learns valuable lessons.

Themes of sibling rivalry and parent/teen conflict lend some expected upheaval, and Donna’s romantic interest in her older sister’s boyfriend adds emotional dimension to the character, although the romantic wrap-up seems somewhat cliché. Chandler includes a subtle spiritual note via a character who quotes biblical passages to help uplift the downtrodden Coalition members.

Still, with its youthful characters, the story should find interest among a young adult audience and with those drawn to an Erin Brockovich-type disdain of corporate greed.