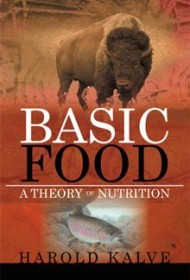 Harold Kalve looks at the history of man combined with personal experiences to draw some contestable conclusions about the benefits and drawbacks of various foods in avoiding weight gain.

The author, who once worked in the food industry as a fisherman and processor in Alaska, calls his book an essay on preventing obesity. It begins by going back in time to discuss ancestral lifestyles and diets. He then moves to more current farming techniques that he believes have possible adverse health effects, such as adding chemical preservatives and using maize to fatten cattle, which are later processed to bleach out “the offending yellow fat marbled in the meat during the last two weeks before slaughter,” he writes.

Kalve expresses concern about modern milk production, referring to a study that finds that “when raised with raw milk, children are virtually free of allergies and are healthier than those raised with pasteurized milk.” This potentially dangerous statement is made with no data or details to back it up. Near the slim book’s end, he notes how he lost 45 pounds over eight years by gradually eliminating foods that weren’t available 1,000 years ago, such as corn products, potatoes, rice, beans, grain products and all vegetables and fruits (save for berries harvested seasonally).

While he offers a short bibliography of sources at the back of the book, the author’s ideas lack well-defined details and attributions within the text. Due to a disjointed approach, readers don’t learn until the end of the book about the personal experiences that contributed to the ideas he shares. In addition, the book is poorly edited and makes glaring errors such as misspellings of authors’ names (examples: “Perl,” for “Pearl Buck”; “Brian Fagen” for “Fagan” and so on).

In short, this largely unsubstantiated work is less a book than an overlong opinion piece. Readers should treat it as such.