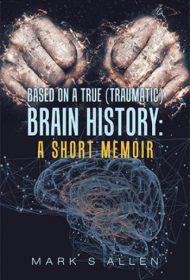 If you suffered a traumatic brain injury (TBI) at a relatively young age, what would life be like going forward? How would you work, develop friendships, date, and find meaning and purpose? Mark Allen provides his answers to those questions, and many more, in Based on a True (Traumatic) Brain History: A Short Memoir.

Allen brings readers immediately inside his world. In Chapter 1, titled “Do You Ever Lose Your Keys?” the author quickly answers the question: “I do. It happens at least three times a day—sometimes more.” Four pages in, he explains: “I experienced a traumatic brain injury (TBI), and I don’t know when or where it happened. All I can say is that it was presumably between the years 2014 and 2017. [Allen completed the book in 2020.] It was related to boxing and mixed martial arts (MMA) for sure…. I just don’t know which punch, kick, or choke led to the injury. I was never knocked out or choked unconscious.”

Allen then goes on to discuss his childhood and what led him into professional fighting (boxing and MMA). He writes of his battles with alcoholism and drug addiction as a young man, and shares his decision to donate a kidney to his mother in 2004—shortly after he’d gotten sober and started fighting professionally.

In the book’s second half, he provides honest assessments of the many TBI-related challenges he faces, including difficulty paying attention, short-term memory loss, combative behavior, depression and suicidal ideation. Despite the condition’s darker aspects, however, this isn’t a downbeat read; Allen never sinks into self-pity. He writes candidly about practical strategies he uses to cope with these obstacles. While many of the book’s later chapters read more like a series of interconnected essays than a flowing narrative, they’re as illuminating and engaging as the rest of the book.

Ultimately, Allen’s remarkable candor and good humor result in a memoir that readers will find intimate, thoughtful, and touching.