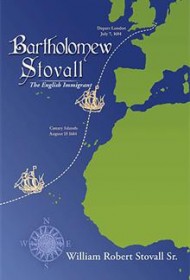 In this enthralling rags-to-riches tale, William Robert Stovall Sr. uses a few known facts to craft a captivating piece of historical fiction chronicling the life of his ancestor, Bartholomew Stovall. Born in the English countryside in 1665, Bartholomew transcends the hardships of poverty, being orphaned at 10, braving London’s perilous streets at 18, a trans-Atlantic journey and four years of indentured servitude in America to start a new life. Along the way, his “gift” of foresight makes impressions on many people and helps lead him to his destiny.

Stovall’s writing talent is apparent from the beginning of the book, when a merchant is murdered for his cargo of illegal Tyndale Bibles and the plague descends upon Bartholomew’s small English community. Murders, underhanded dealings and heroic acts occur throughout, as Stovall builds suspense and compels readers forward. Even subtle interactions between characters are intriguing and believable. One drunken conversation between Bartholomew and a swashbuckler named Captain Pagan will make readers laugh out loud.

Characters are memorable, even if their appearances are brief, including Molly Flanders, the barkeep in London who saves Bartholomew’s life and also has the “gift.”

Bartholomew Stovall offers many factual descriptions of indentured servitude and life in England and America during the period that show that the author did his research well. Details blend seamlessly into the plot so that readers will scarcely notice they are getting a mini-history lesson.

A few typographical errors are repeated throughout, such as using “begin” for “began” and “studding” instead of “studying,” which mars an otherwise excellent story. Overall, however, Stovall tells an imaginative, entertaining tale of his ancestor’s struggles, courage and bravery in a novel that is bound to please a wide audience and especially fans of 16th and 17th century English and American history.